The tanning of cattle hides was a labour-intensive and smelly activity After the hooves and horns had been chopped off the animal skins provided by butchers, the skins were immersed in pits filled with dog dung or lime, scraped and then sprinkled with urine and left to rot in a warm environment. Finally, the hides were soaked for up to twelve months in a tanning liquid to achieve the desired quality of leather.
VR offers the possibility of recreating environments which no longer exist. This is particularly valuable as VR can allow people to experience cultural heritage sites which have long since disappeared. The real world is multi-sensory with sights, sounds, smells and feelings, including motion and temperature, all of which combine to provide richness to any real experience. The aim is to create as authentic an experience of a medieval tanning district as possible.
We have already laser-scanned Spon Street and modern features such as street furniture, cars and buildings from the 16th century onwards have been eliminated from the model. The model will show Spon Street as it would have looked in the later medieval period.
Future work will include medieval dyeing and weaving, which were also major industries in the area. The finished model will be made available to schools and museums in Coventry.
To fully appreciate the medieval tanning process, any virtual reality needs to be multi-sensory: the sites of the skins in various stages of processing, the shouts of the workers, and the pungent smells.
Using the latest multi-sensory technologies, usually used in the motor car industry, it is possible to create a Virtual Reality Model of Spon Street in this period. 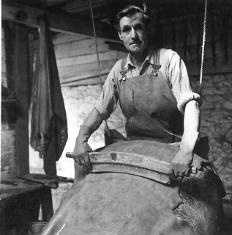 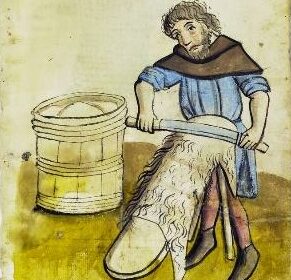 Scraping the cattle hides – the first stage of the tanning process

To read more about our Virtual Reality project, click here